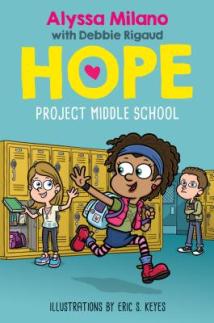 Alyssa Milano is coming home to Brooklyn to sign copies of her book, Hope Project Middle School, on Wednesday, October 16th at 4:00 p.m. The BookMark Shoppe is located at 8415 3rd Avenue in Bay Ridge, Brooklyn.

Hope is eleven years old, and she wants to be an astrophysicist. She loves swimming, Galaxy Girl comic books, her best friend Sam, and her two rescue dogs.

Hope encounters all the trials and tribulations of being a preteen girl while finding her place in this crazy, mixed-up world.

The pretty Italian-American has starred in movies such as 1985’s Commando with Arnold Schwarzenegger and Embrace of a Vampire. But who can forget her role as Phoebe Halliwell in the TV drama Charmed, which aired from 1998 to 2006?

Nowadays, Milano spends her time as an activist while acting and writing books. She has also authored Safe at Home, as she is known to be a huge baseball fan.

Milano will only sign books purchased at The BookMark Shoppe. Ticket includes one copy of Hope Project Middle School.

To preorder Hope Project Middle School, click on the link to the left.

Please check out my other blog @BrooklynSportsWorld.com.