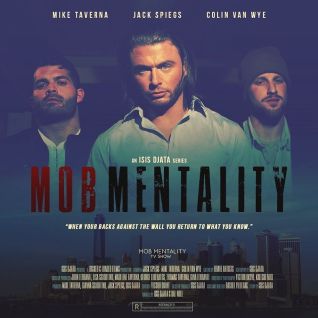 Writer-director Isis Djata will be the first to tell that she is one of the last people you would expect to make a mobster TV show, being an Afro-American woman and law school graduate with zero film-making experience.

But after approximately two years, Djata, who also created and acted in the combined two-episode pilot, defied the odds stacked against her and brought Mob Mentality to life, as it premiered on Wednesday before a packed audience at the SVA Theather in Chelsea, Manhattan.

“For me, I didn’t get a lot of respect doing this,” the Bronx native — who wore many hats during the production of Mob Mentality — told the crowd at the TV show’s unveiling. “A lot of people took me as a joke, and I didn’t mind. I just kept my head down and kept working. I didn’t have time to pay attention to naysayers.”

Low on cash, however, he lands a job as a psychologist at a school for troubled teens. Seeing that he cannot survive on his measly do-gooder’s salary, Ponte Jr. decides to return to his old mob lifestyle, yanking him back into a world of drugs, booze, and unbridled Sodom and Gomorrah mayhem.

Ponte Jr. blends his unconventional adolescent-helping ways during the day with his violent, neck-breaking tendencies at night, making him a walking enigma.

Seemingly made for the role of the long-haired Ponte Jr., Spiegs lends his gripping portrayal of the ruthless hooligan to his Yonkers, N.Y, roots and solid acting chops.

“Somethings I drew from my real-life experience, and everything else was method acting, fellows,” Speigs quipped to the audience.

An accomplished professional wrestler whose gimmick is a take on the Man of Steel, Mike Taverna said his Anthony Sorrentino tough-guy character, which is opposite of his baby face in-ring persona as Mike Verna, will take his acting career to new heights.

“This (Mob Mentality) allows me to kind of go away from what I do in the ring, which is pretend to be Superman,” the Mob Mentality co-star Taverna explained. “And take on roles that are a little more challenging, and take my career as an actor to the next level.”

Taverna went on to say that Djata turned down two network offers because they wanted to recast the TV show and take it into an entirely new direction. But she rejected them both and stayed loyal to her cast and vision, much to the actors’ delight.

“We started doing this about two years ago,” he said. “It started with a sizzle reel, and it evolved over the time that we’ve been doing it. And during that process, Isis actually received two offers from network television, to pick up the show. And those two networks wanted to recast everybody, change her direction, and basically make the show their own. So she said, ‘Go Fuck Yourself.'”

The Mob Mentality combined two-episode pilot features many laughs, cringe-worthy scenes, and twists and turns that will leave you begging for more.

Djata said she is in the process of pitching Mob Mentality to several networks.