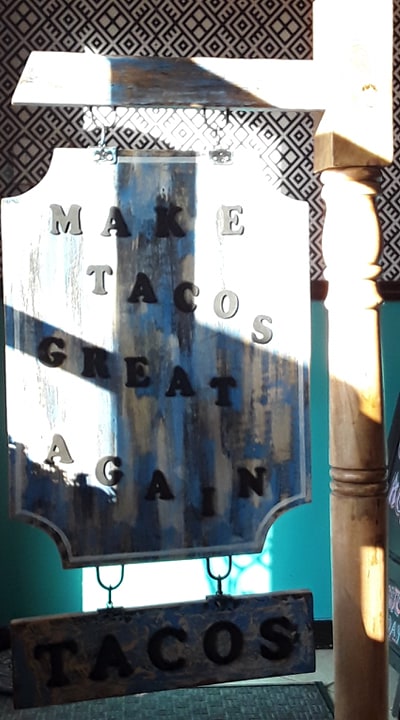 Move over Taco Bell and Chipotle, there’s a new legendary Mexican eatery in Chatham, New Jersey called FolkLore Artisanal Taco, which just opened its doors on Thursday to a plethora of hungry patronages, according to the owner.

With a vast menu of delicious offerings, you can enjoy anything from tacos and quesadillas to burritos and nachos. But it’s FokeLore Artisanal Taco’s devotion to quality ingredients, with an added heaping helping of love, that separates it from the mundane Mexican establishments that crowd the New Jersey food landscape.

My girlfriend Maggie and I have been eagerly anticipating the arrival of FokeLore Artisanal Tacos, which also has an outpost in West Orange.

Surrounded in a simple yet traditional Mexican decorated atmosphere, Maggie ordered the Tacos Cochinita Pibil — Mayan-style pulled pork, slow-cooked with citrus axitote (a spice made from the red seed of the annatto tree) and Mexican herbs. I had a small bite and it was pretty good.

But I summoned up a decent sized Burrito Bowl (sans burrito) with chicken, rice, black beans, cheese, guacamole, pico de gallo, and a side of sour cream thrown into the mouth-watering mix.

Each level of the bowl you order comes with a choice of meat. For instance, I had two other types of meat from which to pick; either Pollo Asado or Carne Molida.

All in all, I went with the healthiest option, in my opinion, while leaving full and satiated.

We didn’t order dessert, but they do serve churros with either Nutella or Dulce de Leche and Flan — a sweet dessert that is prepared with whole eggs, milk, sugar, and vanilla, though there are different variations made throughout Latin and South American cultures.